So before I write I take a look at what’s out there so as to make sure I’m not just repeating what someone else has already said. This topic has been discussed endlessly yet no one says anything other than what they’ve experienced. I read about what some outfitters say happened to them and it doesn’t do a damn thing  for me and I doubt it does for you.

On my property I have 3 food plots spread out that total about 7 1/2 acres of food. I’ve got just about everything growing so the deer have a reason to be there all year long. I hunt 2 properties that are completely different. The one I’m discussing is my lot that’s close to home that I manage strictly for deer. It totals 80 acres and has 3 creeks, lots of cover and my plots. Like many I get pictures of nice bucks all summer into the early Fall and suddenly they disappear. This drove me nuts for years , so what to do?

1st off it’s best to accept bucks are going to move and we can’t do anything about it. Why they move is a whole ‘nother topic I will write about soon , but the fact is they move. We see bachelor groups of bucks in the summer that sometimes are unbelievable. Maybe not a group of trophy bucks but lots of them and we have to assume they all aren’t going to stay where they are when we see them. They can’t, it’s natural for them to breakup and find different ground for the upcoming rut. Preferably a spot with little competition from other bucks. The bucks that are left are still going to come and go which leaves us feeling like there’s nothing there at times. We know bucks may very well spend a summer/early Fall in one spot, the rut all over the place and then come back to the summer/early fall location when the rut is over. I’ve seen it more times that I can count. 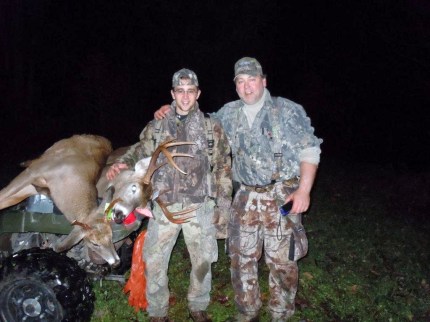 The fact is sometimes there isn’t anything there ,especially when we’re talking about a smaller property like mine. The cameras I have on my property allow me to pretty much keep track of what bucks are around and more important what bucks aren’t. What I’ve found over the years is they usually will come back before the season is over, especially late in the season. Sometimes I’m seeing nothing but I know bucks are there because I’m getting pictures everyday, the same is happening to you. I’m not saying they’re there and you aren’t seeing them but sometimes they are there and aren’t showing up during daylight.

There is a silver lining to this and I cling to it every season because I always have those times where I’m seeing nothing. If my bucks are moving so are everyone else’s. That means there is always the chance a buck I haven’t seen, know nothing about, is going to appear out of nowhere. It happens every single year on my property and it’s probably the most exciting part of hunting. I’ve gone from losing sleep over bucks vanishing to embracing it because I know something is going to show up and surprise me. The 10 point you see in the picture above is exactly what I’m talking about. I never had a picture of that buck all year ,never knew he existed , then one day he walked in front of my brother. My brother sends me a text and says “I think I just shot one of those 6 pointers running around here”. It wasn’t one of those 6 pointers that was running around and man it was fun to get shocked by a buck we knew nothing about.

This past year I was getting pictures of 2 nice bucks who were always together. Then late August rolls around and guess what? That’s right , they’re both gone and I have no idea where they are. Come to find out one of them was there all along but I never got his picture. I went 2 months not knowing he was there and then one day out of nowhere he walks in front of me. I learned something from that deer , which is sometimes they really aren’t gone. He managed to dodge my cameras and me all while laying down rubs, scrapes etc and living as he always had. What changed is that he wasn’t hitting my plots and was getting his belly full in the woods so I never got a picture of him. The 1st day of muzzleloader season I got away from my plots , sat in a stand back in the woods and saw him an hour before dark. It’s not the last time I do that and I wish like hell I did more of it sooner. It’s probably no coincidence the 10 pointer my brother killed was shot off the same stand.

We know bucks are going to move and sometimes seem invisible. After 40 years of seeing this I’m done losing sleep over it. From now on I’m looking at it as opportunity , an opportunity for something to shock me and the opportunity to learn something. They’re going to move so we ought to move. Try a different spot on your property once in while and stay patient. I mentioned earlier that bucks will come back at some point in the season and they will. We won’t know about it if we aren’t there so don’t let the lack of sightings bother you. Get in the woods or you won’t even know when that buck you don’t know shows up or when the ones you do know return. Good luck and as always thank you for stopping by.   mj

Help is not coming. Neither is permisson. - https://twitter.com/Grey_Enigma